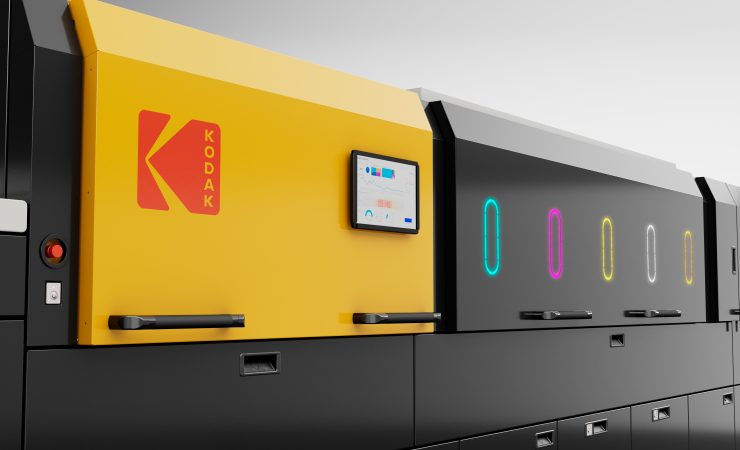 In a raft of announcements led by CEO Jim Continenza, Kodak has launched a fast five-colour toner press aimed at PoP/PoS display and small packaging applications, expanded the affordability of its Prinergy on Demand workflow software, added an inkjet varnish solution for its Prosper web-fed digital press line and updated an app for its CTP customers.

The new press, the Ascend, is a toner press designed to print high coverage on heavy stocks up to 762micron in sheets up 360 x 1219mm at the equivalent of 120 A4ppm. Kodak’s vice president of digital print Jeff Perkins said this was at least twice as fast as flatbed inkjet alternatives (equivalent to 572sqm/hr) and that running costs would be ‘significantly less’. He also noted that the 1.2m SRA3-plus long sheet format offered 28% more area than standard B2.

Based on a ‘robust’ chassis, the Ascend has five colour stations among which a new set of toners optimised for packaging and signage/display work may be exchanged freely, via a process that Kodak claims to be six times faster than in competitors (presumably referring to machines like the Xerox Iridesse and Ricoh Pro C7200/Heidelberg  Versafire EV, which have six and five stations respectively plus a range of additional colours). In addition to standard CMYK, there will be 13 special colours or effects toners available, including opaque white, a clear anti-microbial varnish and a ‘foil’ or metallic option. The full list wasn’t disclosed but digital print specialist Diego Diaz confirmed that several ‘favourites’ from the Nexpress/Nexfinity line, including gold, ‘dimensional’ and metallic clear would be added; Mr Perkins stressed the ability to print and embellish in a single pass while also stating that the print was very de-inkable for recycling after use, as well as being safe for secondary food packaging.

Todd Bigger, VP for software, introduced Prinergy on Demand Access workflow software, a web browser-based version of Kodak’s cloud-based workflow suite that he said will bring access to its capabilities to mid-size and small print shops, with the ability to achieve rapid activation and integration with existing systems at the client’s site. The monthly subscription-based service is rapidly scalable in both directions as customers’ needs change and like the full version, is hosted on Microsoft infrastructure for security and reliability. Acknowledging that Prinergy on Demand had the potential to replace printers’ existing MIS as part of a complete end-to-end automation offering, Mr Bigger suggested that moving from an existing MIS to a Prinergy-only solution would take between 90 and 120 days.

Mr Perkins also announced an inkjet varnish option for Kodak’s Prosper-S line of web-fed digital presses and imprinting systems that is intended to remove the cost and additional complexity of hybrid flood coating in packaging applications. Saying that it is easy to integrate with existing Prosper presses, he also claimed that the water-based varnish, which is only applied where needed, has a durable matt finish that is both water and rub-resistant whilst also being more environmentally friendly than UV-curing or solvent-based alternatives.

A Mobile Control app for Kodak CTP platesetters was also announced, allowing up to 10 devices to be monitored and controlled remotely.

The Ascend press is expected to ship in Q2 of 2022, with Prinergy on Demand Access in Q1. The varnish option for the Prosper presses will be available by the end of this year and the CTP app is downloadable for iOS and Android devices immediately. 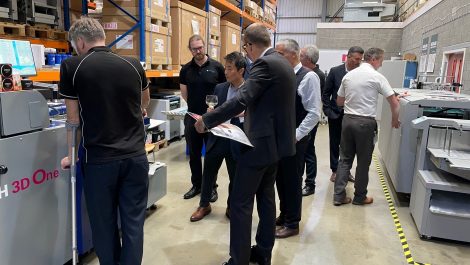 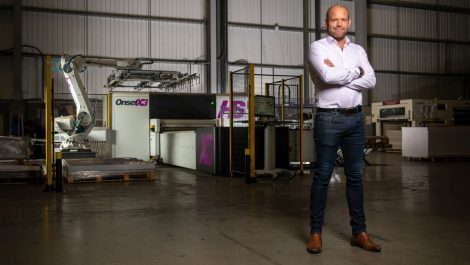 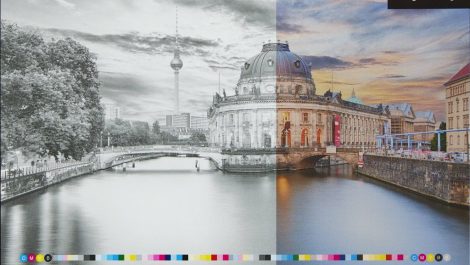 Ricoh metals it up with gold and silver toners 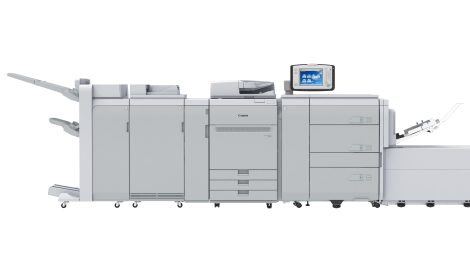 Canon gets a sense for registration and colour