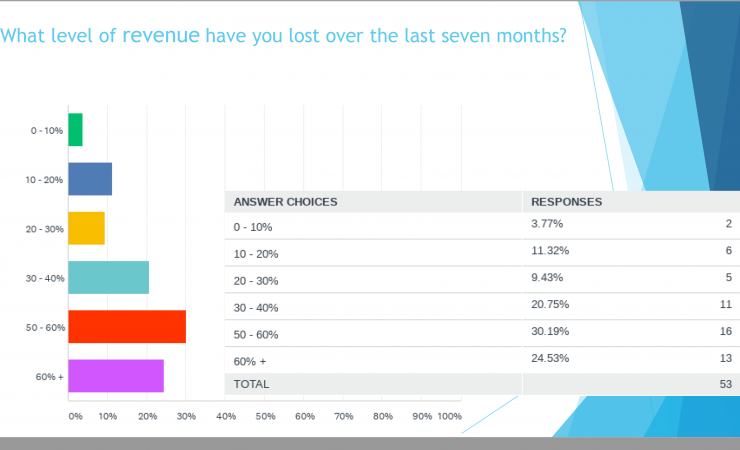 A survey of members by the IPIA/BAPC suggests that nearly half are expecting to make redundancies in the the coming months and will require further financial support to remain viable beyond the end of the first quarter of 2021.

The survey was conducted during the second national lockdown in November 2020 and attracted responses from 53 print companies across the UK, of which well over two thirds were business-to-business, B2C or trade printers; around 60% predominantly serve hospitality, retail and leisure, business or entertainment events. Over two-fifths (43%) are ‘fully’ open, with nearer half (47%) ‘partially’ open and five of the 53 closed at the time.

Encouragingly, nearly 36% had not made and did not plan to make any redundancies, but over half had made or were expecting to make some, with between one and five jobs lost the most common level (49%) and a couple expecting to cut more than 20. Government support measures have been critical for the vast majority, with over 87% saying that variously the furlough scheme, grant funding, loan scheme extensions or self-employed grant scheme upgrades had made a ‘moderate’ or ‘significant’ difference.

While these schemes have clearly been valuable, even those who said they had made a moderate difference indicated that support beyond the end of March 2021 would be required (the survey was completed well before the Chancellor announced a further extension to the end of April 2021 in mid-December). Revenue impacts on respondents have been heavy, with more than half experiencing a loss of 50% or more, while less than a quarter had seen sales drop by 30% or less.

The IPIA and other industry bodies have lobbied government continuously since the beginning of the lockdown, and while they have received responses from ministers, no industry-specific pledges have been made. ‘We are clearly the worst affected manufacturing sector now, and although the current renewal of support is keeping people on life-support as per the survey, if they don’t go farther and more targeted we are going to really suffer after Q1 2021,’ said Brendan Perring, general manager of the IPIA.