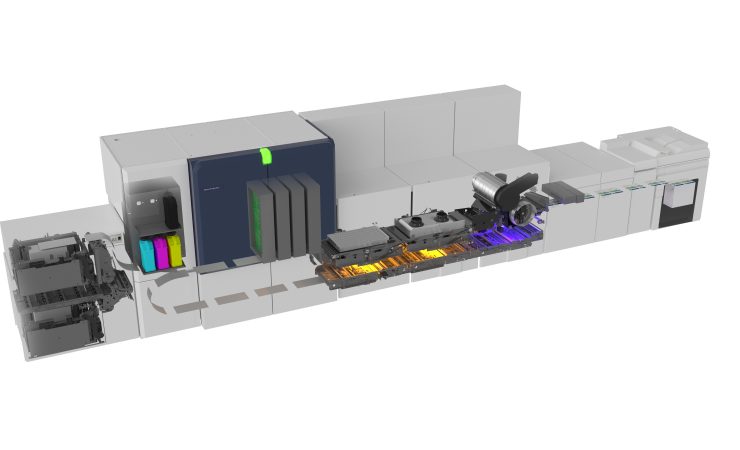 In a slew of announcements made during an online event, Xerox has introduced Colour Accelerator, a drop-in module for existing and new Baltoro inkjet presses that enables a wider range of applications through support for higher coverage on heavier and glossy stocks.

Comprising an extra dryer, which doubles drying capacity, and a forced air cooling unit that is intended to prevent cockling and curling, the Colour Accelerator enables a broader range of applications for the sheet-fed inkjet press introduced in 2019. These include products such as postcards, high quality direct mail, magazine covers and personalised calendars on materials such as 300gsm gloss coated card.

The heavier ink coverage need for high saturation printing is supported in the software that works with the Baltoro’s inline spectrophotometer which is used to create G7-compliant ICC colour profiles for different media with a minimal need for operator colour expertise. Inkjet drop sizes may be optimised for colour vibrancy / quality or for ink savings, depending on application. Xerox says this ‘automated intelligence’ will be supplied as a system software upgrade to existing Baltoro users.

Other quality improvements include Intellipurge, a ‘micro purge’ of printheads that runs during normal printing, both compensating for and correcting missing jets, plus True Dot, an on-the-fly dot placement diagnostic and correction process that is said to improve fine high contrast details as found in type, vector graphics and the edges of white knock-out areas. Support for anti-aliasing (as used when rendering type or vector graphics in Photoshop, for example) is also being introduced and will be available as an upgrade for existing Baltoro customers.

Xerox also launched three new colour presses and updates to its mono line. The VersaLink C8000W offers CMY plus white printing for use on coloured media, all in a 1sqm footprint and at an ‘affordable’ but unspecified price. Xerox intends it to be an entry point into embellishment printing. The Versant 280 is a ‘mid-production’ 80ppm press which can handle stocks up to 400gsm with no speed reduction; the Versant 4100 is described as a workhorse 100ppm printer (at 52 to 300gsm; 80ppm up to 400gsm). Monthly recommended volumes are 80,000 and 250,000 pages respectively, with duty cycles of 750,000 and 1.2 million pages. The Versant 4100 includes cloud-based PredictPrint Media Manager software which helps set up rapidly for printing on different media, based on a database of practical customer information that expands and updates over time. This is an option for the Iridesse press too, which also gains a new fluorescent pink toner option which can be swapped for any of the other colours supported.

Support for the various embellishment options offered on new and existing Xerox presses is built into version 6 of Xerox’s FreeFlow Core software, allowing effects such as gold, silver, clear, white or fluorescent toners to be added to jobs without having to edit the source artwork. Xerox is also running an educational programme to explain to printers and designers how to create files specifically to exploit the creative potential of these ‘beyond CMYK’ capabilities.

For users of mono printing in banking and security applications, the MICR print speeds in the Nuvera 157MX and its perfecting variant have been increased, to exceed ‘any competitive press’, according to Xerox.

‘These new products and features represent the sweet spot of technology, where end-to-end solutions support our customers’ need to differentiate and expand their businesses in any economic environment,’ commented Marybeth Gilbert, vice president and general manager, Production Business, Xerox.