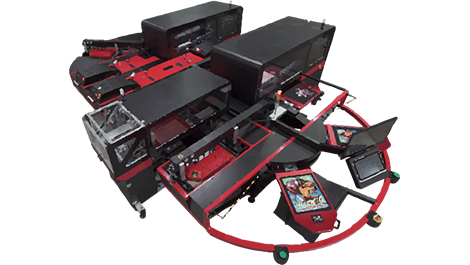 The Ovaljet gets its name from its shape, more commonly seen in screen printing

Adelco has become the UK distributor for the OvalJet, a high production direct-to-garment printer.

Described as a ‘revolutionary’ machine that prints up to 240 garments per hour, the Ovaljet utilises Ricoh Gen 5 printheads, with CMYK, red and white inks available and is developed from industrial screen printing.

Claimed to provide ‘unmatched colour vibrancy, superior wash durability and the fastest print speeds in the industry,’ the OvalJet is in its third generation and is marketed as ‘closing the digital print gap against conventional screen print’ in unit costs the one to 600-piece run, with a claimed cost of 45 pence per print, said to be half that of direct competitors.It can be run by a single operator utilising a single ink set for all substrates and supports inline resin-based pre-treatment; it can also print fully variable neck labels in the same pass, with no decrease in print speed, via a patented process. Adelco reports that machines sold out in the US last year.

The news came after news that the 17-year partnership between Adelco and Kornit had come to an end following the latter establishing a UK entity devoted exclusively to serving the British market. Adelco will continue to be involved with Kornit on other international projects.