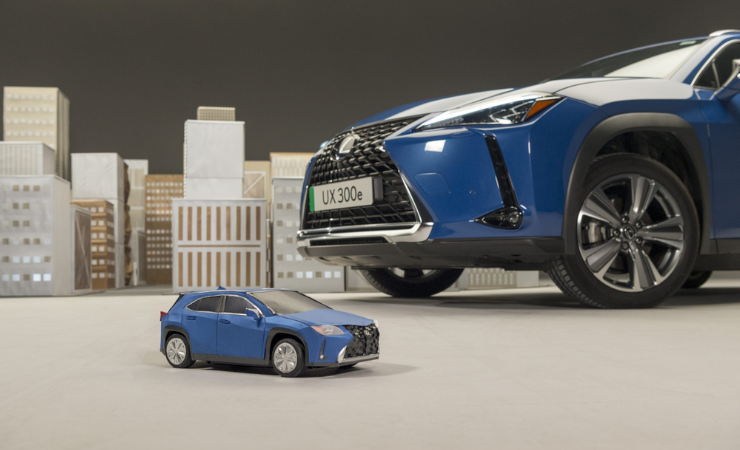 The paper car model took five and half weeks to make

London-based Scottish paper artist Kyla McCallum has constructed a miniature car entirely made from paper, having taken advice on suitable materials from Antalis.

Ms McCallum, of Foldability, was commissioned by automotive manufacturer Lexus to create a scaled car, complete with a paper city through which is cruises, to feature in a promotional video in tribute to Takumi craftsmanship. The paper car model, which took five and half weeks to make, was built on top of a remote controlled chassis, on a 1:10 scale and included over 100 individual parts.

Curious Metallics Electric Blue was chosen as it is almost an exact match to the paintwork on the Lexus UX 300e featured in the video. Curious Alchemy Silver and Titanium were chosen for the paper city to create a ‘Metropolis’ feel. The tallest building was over two metres high and therefore required a stiff and robust paper.

Ms McCallum said, ‘The Curious Metallics Electric Blue was really easy to cut and mould into shape, and it didn’t pucker easily, which was great.’

The entire project took over four months to complete, from the initial concept through to filming the final set.

Sales manager at Antalis, Vicky Weatherington said, ‘We have been excited to witness the progress of the project– it’s a great example of the versatility of paper. We’re seeing more big brands turn to paper for their creative output and it’s fascinating to see the extraordinary creativity that results.’