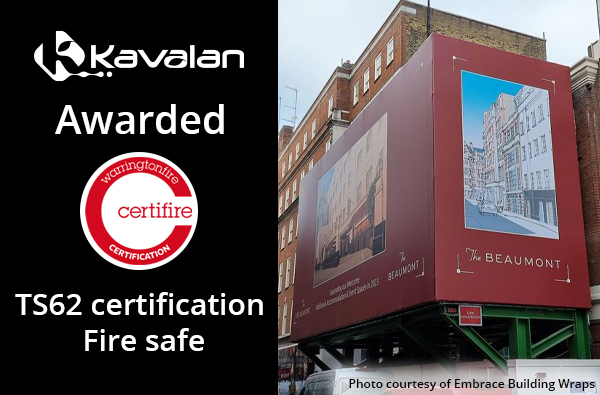 Certifire is an independent third-party certification scheme that assures performance, quality, reliability and traceability of products and systems.

Certifire is an independent third-party certification scheme that assures performance, quality, reliability and traceability of products and systems. It is recognised by regulatory authorities worldwide as an international mark of fire safety across a diverse range of products.

Its approval of Kavalan means that the materials, which are available in the UK and Ireland exclusively via CMYUK, can be used on any scaffolded buildings and construction sites, along with the many other promotional and branding applications for which banner and mesh are used.

Michael Crook, CMYUK’s business development director, commented, ‘The Kavalan range is very impressive and renders traditional PVC banner obsolete. Not only now has it been given the ultimate fire certification but it also passed the BS 3424 pt. 4.6 tensile strength test. TAYA, the manufacturer of Kavalan has also put it through the rigorous LCA (Life Cycle Analysis) programme to measure its environmental impact.

‘Kavalan makes the switch from traditional PVC very compelling. It delivers on strength, performance, safety and the environment. With fire safety for construction now uppermost on the agenda, anyone involved in this activity will need to specify materials that evidentially demonstrate they adhere to robust certifiable standards.’

The audit itself was carried out by Warringtonfire, whose principal certification engineer, Matthew Dale, added, ‘Certifire has become the industry standard for fire safety certification, even where there is already a mandatory market requirement such as CE marking. Choosing Certifire means choosing the mark of a reputable third-party certification body, and gives assurance as to the performance of the products, and we are delighted to bestow such a well-deserved accreditation on Kavalan Sunlight Weldable and Kavalan Spiderweb 300.’