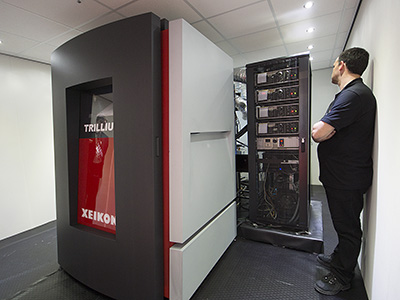 Xeikon is providing more details of its forthcoming liquid ink digital printing technology, which it calls Trillium, and showing a small monochrome prototype on its drupa stand. It was originally mentioned by the company under its development name, Quantum, but drupa is its first public outing.

CEO Wim Maes said that this will be the basis of the company’s future production colour presses, as it does not think that inkjet can provide the right combination of high speed with high image quality. He said that colour presses will reach the market within one or two years.

He also pointed out that at Ipex 1993 Xeikon showed its first web toner press, the DCP-1, at the same time as Indigo’s founder Benny Landa showed his first E-print 1000 press. At Drupa 2012 Xeikon is announcing its next generation technology while Mr Landa is returning with his own company, Landa Corporation, to introduce the new Nanography process and presses.

The initial implementation will be aimed at document printing applications, he said, although the quality benchmark for eventual development is suitability for direct marketing materials.

The small prototype on the stand (pictured above) is running at 60 metres per minute, although it has run at double that in tests, he added. It uses the same LED imaging heads as the current Xeikon 8000 series dry toner presses, meaning a print width of up to 52 cm. ‘We have tested the printed paper for recyclability, which is important to Xeikon,’ he added.

The liquid ink will be manufactured in Xeikon’s existing toner factory in Belgium.

Trillium is an electrophotographic print technology that uses high viscoscity toner inks. This is a technology that the company acquired by buying the patent. Although Mr Maes said he is contractually obliged not to reveal the source, it’s clear from a patent search that it is the liquid ink technology developed by Alex Ozerov, originally at an organisation called Research   Laboratories of Australia.

An earlier version of this was licensed to Japanese press maker Miyakoshi, which uses it in its liquid ink web presses. The same process is also used in the sheet fed B2 liquid ink press that Miyakoshi is jointly developing with Ryobi.